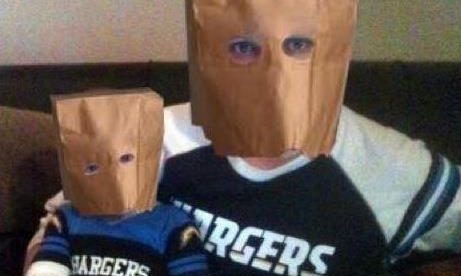 I have been a fan of this franchise since I can remember, though I did not care about football until I was a pre-adolescent.  I wrote a whole essay on this topic last year to have in the can like newspapers carry obituaries for dignitaries and celebrities, discussing the role the Chargers played in my family and my personal relationship with the franchise.  It was heavy stuff…meeting Junior Seau, the all-pro linebacker who would shoot himself in the heart after retirement in part because of the effects of chronic traumatic encephalopathy on his brain…the role the team played in my cross-country move in the middle of adolescence…the changes in my relationship with my father in the last years of his life…because it was personal stuff.  It was my reckoning with the Chargers, what the Chargers meant to me.  And I had thought about it for a long time, first really coming to grips with writing the obituary in 2008.  There are notes going back further, after the last San Diego Super Bowl when the NFL said there would have to be a new stadium to have another San Diego Super bowl.  I have had 14 years to prepare for this day, a day it would be tough to argue none of us saw coming no matter how preposterous the idea is.

Dean Spanos is moving the football team he owns out of the city it operated in for 56 years; no major sports team has operated in an area longer to then relocate.  The reports out of San Diego are focused on betrayal; that is expected.  But the reports in Los Angeles did not make the front page

The front pages in San Diego and Los Angeles this morning. Notice something missing in Los Angeles? pic.twitter.com/vACCSZ7HW8

The argument from the Chargers will be about an inability to get a stadium deal with the city of San Diego.  That’s been the party line for 14 years, and there is truth to it…the City of San Diego was unwilling to negotiate city funds to the level the Chargers ownership wanted.  I feel confident saying if the city had built a stadium for Dean Spanos, it would still be the San Diego Chargers.

The city did not build the stadium, and the team is no longer the San Diego Chargers.  And Dean Spanos is a villain in San Diego.  But unlike other times when franchises moved, like the Baltimore —> Indianapolis Colts, or the Cleveland Browns —> Baltimore Ravens, there is no interest on the other side, no fan base clamoring for the team.  Dean Spanos leaves one space to the sound of eggs splattering on a car windshield, to enter another space to the sound of crickets.

The city was right to not build the stadium…San Diego is notorious for financial mismanagement, but there is no economic return on investment for the city.  Beyond emotive responses from fans and a call for civic unity when a winning team exists in the municipality, there is no data to support a city’s financial investment in a state-of-the-art sports field.  There costs could never outweigh the benefits.  And that is because the football team was never truly the San Diego Chargers; they were the NFL Chargers playing on a lease in San Diego.

The rise of modern sports came alongside the rise of neoliberalism, but sports have the establishment of the Great Society and America’s Golden Age to thank for this serendipitous confluence.  Civic pride and civic engagement related to local sports when sports were an idle curiosity; the ownership of teams has almost exclusively been through an individual or a corporation, but the growth of communication technologies established the location of the team in a new space before globalization could provide easy moving for humans and data.  Sure, teams moved markets before neoliberalism (more frequently than they do today), almost exclusively due to extreme financial duress in part because the operation of sports organizations was a traditional businesses.  Globalization allowed for the growth of these businesses into multi-national entities rivaling the size and structure of civic governments.  Neoliberalism allowed for the teams to link to the public aspect of the organization while operating as a private enterprise.

The result has been a renaissance in sports complexes and a hostage situation for cities.  26 of the 32 baseball stadia have been built in the last 30 years, and two of those are being jettisoned (or sued over) in hopes of getting a newer one, and 25 of 32 NFL stadia fit the same timeline.  The majority of these facilities have been subsidized by public funds…it is not a decision a municipality wants to make, but one they felt they had to.   This was the age of neoliberalism…to not fund would risk loss of not the team as much as a loss of civic identity.  The result has happened today: the Chargers are leaving, but they will still exist…what has been lost is the San Diego Chargers.  What happens to San Diego here?

Eight years ago, I would have expected public sentiment would be on the side of the owners…the NFL was growing and the science was not as strong to argue against public funding.  Dean Spanos would still be a villain in San Diego, but nationally his argument of but there is no stadium without public funding would strike a chord in the sports landscape.  Today Dean Spanos has few supporters beyond other owners saying what could he do without public funding.  There was  considerable public funding; today we recognize San Diego had given the Chargers plenty…the public already paid for tickets and merchandise and television rights fees through cable subscriptions.  Using taxpayer dollars, or using a new revenue stream milking tourists for tax dollars, would take funds designated for social services and put them in the hands of not the San Diego Chargers but the private business Chargers…it would be a double whammy on the consumer.  That we have rejected this, and that there is no solace for Dean Spanos in his spurned city nor his new home, is evidence we are leaving the age of neoliberalism.  I fear that the replacement will be no better, as Dean Spanos can take his lost popularity and do just fine with a franchise doubled in value, and people will continue to watch football and unless another city stands up the next time this happens we will fully remove the veil that any of this was ever about community and be blatant that it’s a money grab and owners orchestrate city heart strings to pull dollars out of pockets.  But this is the end of an era more than the start of a new one, and perhaps the intellectual arguments will recognize the emotive and work together for some sort of common good.